The new Windows Server 2016 product is now on the horizon and officially slated for next year. As this looks to be the most comprehensive built out of Windows Server yet and possibly the ushering in of a new era, we thought it would be good to take a look at the rich history of Window Server Product Development from 1993 to 2013. The trend in server and networking technology is nicely seen in the path blazed over the years by the Microsoft Server teams. 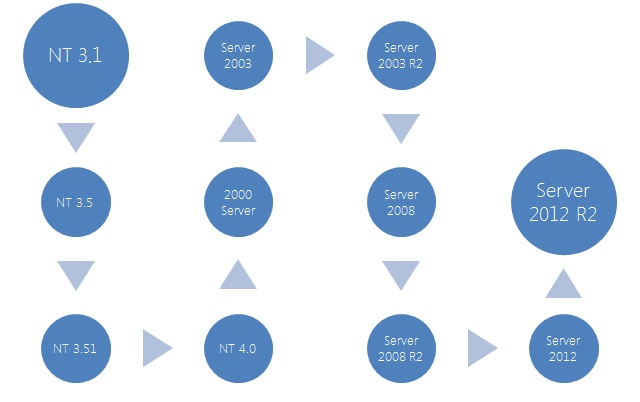 NT Server 3.1 is a 32-bit operating system developed by Microsoft. The first of the Windows NT family and the first true server product. It was released on July 27, 1993. The name was chosen as a brand extension of the similar Windows 3.1. The architecture was designed from scratch, and was originally intended to be a rewrite of the OS/2 operating system that Microsoft had co-developed with IBM.

NT Server 3.5 released on September 21, 1994. It was second server product in the NT family. It greatly improved on the performance and stability of the 3.1 release. With NT 3.5 we get the first use of the “Workstation” and “Server” product names. These replaced the “NT” and “NT Advanced Server” product names used in version 3.1. NT 3.5 includes integrated support for Winsock and TCP/IP (a great improvement of 3.1).

NT Server 3.51 is the third release of Microsoft’s Windows NT Server OS line. It was released on May 30, 1995 (9 months after NT 3.5 and 3 months before Windows 95). Included support for the PowerPC architecture (IBM was too slow to comply with the associated hardware). Added client/server support for the soon to come Windows 95 client OS. Introduced PCMCIA support, NTFS file compression, replaceable WinLogon (GINA), 3D support in OpenGL, persistent IP routes when using TCP/IP, and ToolTips (display of descriptions when mouse pointer was placed on toolbar buttons.

NT Server 4.0 was the forth of Microsoft’s Windows NT Server line. It was released on 31 July 1996. It was 32-bit and incorporated the Windows 95 GUI, including the Windows Shell, (Windows NT Explorer) and the use of “My” notation (e.g. My Computer, My Documents, etc.). Added most of the apps introduced with Windows 95. Included some enhancements from Microsoft Plus! (e.g. font smoothing, full window drag, high-res color icons, wallpaper stretching, etc.). It was the last major release of Microsoft Windows to support the Alpha, MIPS or PowerPC CPU architectures.

Windows 2000 Server was the 5th in the Microsoft Server line. It was released on December 15, 1999 and launched to retail on February 17, 2000. It would be the last version of Windows Server to display the “Windows NT” designation. It came in 3 editions (Server, Advanced Server, and Datacenter) and was designed to work with the new Windows 2000 Professional desktop OS which was released at the same time. This is the first use of the word “Professional” (replacing “Workstation”) which would continue in future products (except for Vista). 2000 was a major new product introducing Active Directory Services for the first time along with other key new features (e.g. MMC, NTFS 3.0, EFS, DFS, Unattended mode installation, etc.)

Server 2003 was the 6th in the Microsoft Server family. It was released on April 24, 2003. It added the XP GUI, stability improvements, better security, and an enhanced Active Directory Service. This release represented a strong move by Microsoft to incorporate the .NET Framework and .NET branding. It included compatibility modes to support older apps and added better deployment tools to ease the transition from NT 4.0. It introduced the concept of Server Roles (which continue to 2016) and new configuration wizards. It came in 5 flavors: Web, Standard, Enterprise, Datacenter, and Storage Server.

Next came Windows Server 2003 R2 which released to on December 6, 2005. This was the first R2 designation (used again in 2008, 2012). It was released for x86 and x64 platforms (not for IA-64). It came on 2 CDs, the first CD being the main OS CD with SP1. The other CD was for optional features. Key new features include Centralized management tools, enhanced DFS, improved WAN data replication, better extranet support, password synchronization with NIS, Storage Manager with SAN support, virtualization capabilities (in R2 Enterprise and R2 Datacenter editions). The notion of Server Roles were expanded to include typical setups for File Server, SharePoint Services, and Domain Controller (Active Directory).

Windows Server 2008 was the 8th product in the server line of operating systems. It was released to manufacturing on February 4, 2008, and officially released on February 27, 2008, it is the successor to Windows Server 2003 R2. It built from the same base code as Vista and included new server features. It introduced Server Core (a stripped back, bare bones version of Windows Server with no shell, no IE, no .NET Framework, etc.). Other new features included new Active Directory roles with identity, certificate, and rights management services, Failover Clustering, Self-healing NTFS, and Hyper-V (forming a core part of Microsoft’s new virtualization strategy).

Windows Server 2008 R2 was the 9th server OS produced by Microsoft. It was released to manufacturing on July 22, 2009 officially launched on October 22, 2009. It was built on the same kernel as Windows 7 and incorporates the new 7 GUI. It was the first server OS to be 64-bit-only. Major new features included heavy improvements in virtualization, Active Directory (e.g. introduced the AD Recycle Bin), a new IIS (7.5), better power management, added PowerShell 2.0 to the Server Core (thanks to a thin addition of .NET Framework). It came in 8 whopping flavors (Foundation, Standard, Enterprise, Datacenter, Web, HPC, Itanium, & Storage Server).

Windows Server 2012 was the next server OS product to replace 2008 R2. It was developed concurrently with Windows 8, included the 8 GUI (including the Metro start menu design). Officially called Server 2012 in April of 2012. The RTM release was in August and it was released officially in September 2012. Came with a new Server Manager, IIS 8, the ability to switch between Core and GUI (very nice), a new version of Hyper-V (which added network virtualization, multi-tenancy, storage resource pools, cross-premise connectivity, and cloud backup), introduced ReFS (Resilient File System) Microsoft’s next generation replacement for the aging NTFS file system. Unlike 2008 R2, 2012 only comes in 4 simple flavors (Foundation, Essentials, Standard, and Datacenter).

The next Windows Server OS product will be based on the new Windows 10 core OS and GUI. At this time no release dates are being projected other than some time in 2016. Sneak peeks could be available as early as late Spring 2015. It is slated to be the most fundamentally reengineered version of Windows Server ever. Microsoft has stated it will be the most “cloud-optimized server” ever. We can expect it to have heavy Azure integration as Microsoft now has the Azure, System Center, and Server teams working together for the first time. The Windows 10 desktop OS is expected to release later in 2015 followed by early pre-release versions of Server with the full release anticipated sometime in 2016.